‘… a voice piece which deals with an attempt to recollect a particular space. At times, it seems as if memories of a scene of a crime are being spoken of. The objects and lighting are elusive and a sense of memory’s ambiguity is evoked’: Smadar Shefi, ‘Listening to Silence’ Ha’Aretz  6/2/2001

I had been thinking about Herzog and De Meuron’s virtualhouse.ch and about alternative ways of making and negotiating nonfactual space. My initial intention was simply to create a complicitous voice that coaxed the visitor to the gallery into remembering a succession of fictitious and slightly disturbing rooms that could be related to the gallery’s own architectural history (a disused bombshelter). By filling the gallery with the sound of the looped recording, I anticipated transforming the space itself (and the other works in it) into something figmental. But any gallery has its own very basic history. Its walls are a palimpsest of lost or conflicting narratives. This piece was as much about that. JD-B

Audio work made after a total eclipse of the sun in 1999. Released into the sky 10 June 2001 at 4.00pm Clissold Park, London as part of ‘High Art’ at the Stoke Newington Festival. Voiceover is a sound picture. It consists of a narrative told in vivid, visual language; the story of something ungraspable that seems important yet inconclusive; a detached and ambiguous detail that invites the listener to form an ‘after image’ of an impossible photograph. 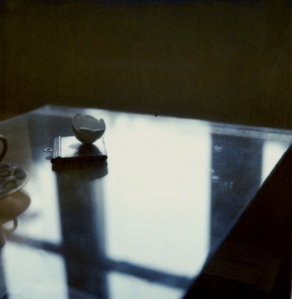 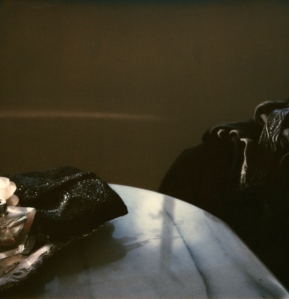 An Arrangement of Incidents 2007 SX70 Polaroids